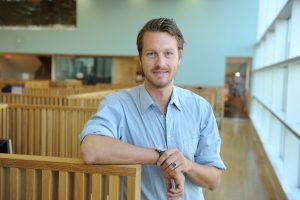 Zack Lane, Head of Delivery Services, Butler Library, Columbia University Libraries was selected as the 2019 winner of the Sharing and Transforming Resources Section’s (STARS) Virginia Boucher Distinguished ILL (Interlibrary Loan) Librarian Award, sponsored by OCLC. The award consists of $2,000 and a citation, which recognizes an individual for outstanding professional achievement, leadership, and contributions to interlibrary loan and document delivery through recent publication of significant professional literature, participation in professional associations, and/or innovative approaches to practice in individual libraries.

Zack Lane was nominated by three of his peers for his efforts to use data to demonstrate that common lending practices were wasting staff time and doing a disservice to library users.  His solid evidence makes a case for setting aside old ways of thinking and focusing instead on adding value to every transaction for every library user.

There is a saying that ‘culture eats strategy for breakfast,’ and librarians are not immune to the challenges of implementing change in environments with deeply ingrained culture.  Yet in a relatively short period, Zack was able to gather the data to demonstrate that longer loan periods result in fewer renewals and greater patron satisfaction.  He then set about sharing his findings within his local consortia, then more widely at national conferences.  Zack’s analysis of Columbia University’s lending and borrowing led him to change their policies. This has led to a widespread and increasing adoption of a 16-week loan period.

Another sacrosanct practice that Zack sought to end is the widely-held practice of lending libraries billing borrowing libraries for lost or long-overdue items.  Zack was able to demonstrate that invoicing for long-overdue materials, especially among consortial partners, was a wasted effort, requiring an output of significant staff time for little financial gain.  Specifically, too much staff time is spent charging and paying other libraries for items lost by shipping providers, and that these lost items represented a very small amount of materials that could be easily replaced.

“I believe that Zack’s efforts have had a substantial impact on encouraging libraries to rethink their policies and overcome their fears with regard to lending their collections,” wrote David Larsen, 2014 winner of the Virginia Boucher-OCLC Distinguished ILL Librarian Award.  Another colleague noted that “Zack makes every group he’s part of better, and every colleague with whom he interacts feels inspired and more empowered.  He leads boldly, armed with data analysis, solid reasoning, strategic thinking, wit, and humor.”

Jennifer Brannock, Curator of Rare Books and Mississippiana, University of Southern Mississippi Libraries, was selected as the 2019 winner of…